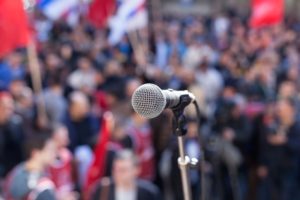 A keynote speech, often called a plenary address, essentially means the main speech of an event. Commencement speeches are a type of keynote. Usually, the keynote speaker’s job is to unify the focus of the event. He or she drives the theme, does the big call to action, or tells the story behind whomever is receiving an award.

A keynote speech (or keynote address) is the main or culminating speech at an event.

​The keynote speaker often headlines the event, and, if it is a fundraiser, is part of the promotion. A good keynote speech can help raise money, inspire sales people to beat the pavement, increase volunteer counts, and acquire votes. A commencement speech falls in this general category, but has specific attributes that make it unique.

Like any speech, there is a call to action, but, as the highlighted speaker, the keynoter’s job intensifies. He’s the main event. He’s Ali vs Foreman, the steak and lobster, and the best wine of the night. The audience expects him to be amazing.

Usually, the theme is clear. The audience knows what the speaker wants, and is ready to be persuaded. That advantage will push the speaker who wants to exceed their expectations.

What kind of delivery depends on the speaker and topic. When Robin Williams spoke, we expected humor. If Hillary Clinton speaks, expect a serious tone. The context, too, defines the flavor. If the audience is the sales force, the tone will be upbeat. If the CEO is there to announce stock options, the approach will be quieter and more academic.

An understated speaker, Steve Jobs delivered some of the most persuasive keynote addresses at various Apple and technology events through the years. His role as CEO certainly gave weight to his voice, but, ultimately, it was the quality of what he was saying, not the delivery, that influenced millions to purchase his products. It could be argued that he was the greatest salesman of all times. His keynote  speeches were his major public presence. He wasn’t the guy in commercials (their 1984 Macintosh commercial is legendary). Instead, he stood in his black turtleneck and mild-mannered glasses and spoke softly about whatever Apple’s newest release was. And, in doing so, he changed the world.

Keynote addresses in politics have long been a staple. Ronald Reagan’s famous address (wrongly attributed to the 1964 GOP Convention) in support of Barry Goldwater’s campaign did not win the Republicans the White House, but it did launch Reagan himself as a major statesman. As you listen, read the text. Reagan’s delivery was effective, but he was supported by an astounding speech. It raised $8 million dollars.

Barack Obama’s 2004 Democratic National Convention keynote evolved him from a new state senator from Illinois to future president. Although, like Reagan, he was supporting a different candidate (John Kerry), the speech vaulted him in a spotlight. The Democratic Party understood the power of the spoken word and the heart of the voter.

I will help you write your speech. Then, I will coach you word-by-word to powerfully deliver it.

Whether you are retiring, or honoring someone else, I will help you deliver with confidence your appreciation.