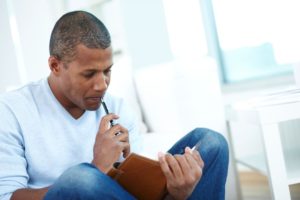 You are nervous. You’ve earned your place at the microphone by being a great leader. The company is depending on you. And you are afraid you won’t perform.

I get it. I understand that not everyone was born an engaging speaker. Most of us aren’t. You can still be very good. You can be confident, ready and capable of delivery.

It is called glossophobia, the fear of public speaking. More colloquially, it is called stage fright. You aren’t alone — 75% of all speakers find themselves afraid at some point.

It could be you see everyone and are concerned they will judge you, or that they will not understand you. Or you aren’t sure you’ll know your material well enough and slip up.

I’ll tell you upfront: Most of this nervousness is natural and can be addressed by practice. Know your material, know the room, and know your audience. Some people join Toastmasters to help with this, but many speakers prefer to be discreet.

Maybe you saw The King’s Speech, the 2010 film starring Colin Firth as King George VI. He struggled with who a stammer and hires Lionel Logue, an Australian speech therapist played by Geoffrey Rush. An excellent, encouraging, and very true movie.

What you see just a sample of is the hard work involved in helping a great leader speak like, well, a great leader. King George VI never joins the ranks of the best speakers ever, but he does become noticeably better.

My approach is different than Logue’s. He was a trained elocutionist with a background in theater. My job is to hep you speak in a business or private setting. We’ll work speech-by-speech, addressing challenges contextually. I don’t teach theory; I train practically.