Are You Speaking to Grads? 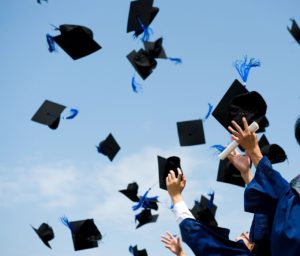 Commencement speech season is here. You are about to speak to graduates and their families. Your college commencement speech matters. Whether it is at university or a secondary education institution, you want to shine. You were chosen because of your leadership and other accomplishments. You know giving a speech is an opportunity to share your experience, values and advice.

Together, we will think through the theme and tone of your speech. I’ll learn who you are, your passions and your voice. You’ll receive everything you need to challenge today’s youth to become great humans tomorrow.

What Makes a Great Commencement Speech?

Maybe you remember the commencement speech at your university. I don’t. I don’t know who spoke or about what. Perhaps he was brilliant. I can’t say. My attention wandered after the first five minutes.

There have been a few noteworthy commencement speeches through the years. More often than not, the notoriety is buoyed by the speaker’s fame. Sometimes, in the case of Apple founder Steve Jobs famous commencement speech at Stanford, his simple message is powerful magnified by how we know who is speaker. He told three stories that many of us could have told, but because we know his success and his impact on technology, it is validated beyond the mere facts of the story.

If you’ve landed here, you are asking what the elements of a good commencement speech are. Being famous helps. Being wildly successful like Jobs helps. But even Jobs required good content told well. His life story offered the good content. The rest was just putting the words in the right order, in his voice. Non-famous people can achieve this.

A commencement speech, simply, is an opportunity to share your experience, values and advice. The precise form is up to you.

A commencement speech affords the speaker a platform to say amazing, unlimited things. Most speeches have a defined structure. Commencement addresses have no such structure. Whether a wedding speech, a eulogy, or an awards speech, not to mention the myriad of business speeches, they all have rules. A wedding speech talks about the speaker’s relationship with someone newly married, a eulogy is about the guest of honor, and an awards speech thanks those awarding it, and encourages others to do something.

For example, the State of the Union can be creatively constructed (insert your favorite political joke here), but it must address the President’s response to the year prior and his plans for the year ahead. He will tell stories illuminating the human condition and how his ideas will help, but he’ll also have to throw in lots of numbers and outlines of his plans. It will be heard internationally, posted on thousands of websites and blogs, supported heavily by his party and denounced just as aggressively by his opponents.

Politics aside, the speechwriters involved in writing the State of the Union have a difficult job.

A commencement speaker, in turn, can play. An economic crisis is unlikely if you flop. No speech can be as free as the one delivered by a guest at a graduation.

Like any speech, it should be as long as it should be. Not a word more or less. Usually, they are from 15 minutes to an hour, with a preference declared by the committee inviting you.

The organizers might suggest a theme, or a few ground rules. Honor them and speak with integrity. But within those few parameters, you can be dramatic, philosophical, poetic. You can break into song, or read from a novel.

Ask yourself the question, “Why did they invite me?” Did you build a business from failure into success? Are you a recent Nobel Prize winner? Are you well-known in the arts community? Steve Jobs knew the answer.

Next, “Who am I speaking to?” Students, yes — but which students? MIT? Yale? Julliard? The student body at each is different. Part of that question includes, “Who do they think they want to be?”

Then, consider your speaking skills. I can’t sing so doing so from a podium will entertain no one. If you can, have at it. Slip a line in here and there. If you have a strong dramatic streak, consider telling stories. The point is to work within your strengths, weaknesses and personality.

Once you know the goal of the speech and what you bring to it, you can start hammering out ideas for getting it done.