Theater and the Art of Public Speaking 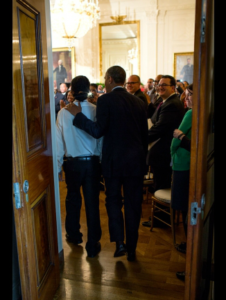 It isn’t complicated to understand: Without theater, a speech is merely an essay read aloud. Add in theater and that essay becomes alive and engaging before an audience you hope to influence.

In some speeches, the theatrical element is obvious. We need look no further than Martin Luther King Jr.’s I Have a Dream speech. As he built his dream, he drew in biblical allusions, poetic repetition, and powerful imagery. There was conflict, drama, and balance, all meeting the strengths of King’s oratorical style. When he delivered it, it was as if he was made to give it.

President Obama recently delivered his My Brother’s Keeper speech in which he described ideas for solving a crisis African-American men endure in urban settings. He told difficult stories matched by strong successes. The intrinsic drama found in the hardship of living on Chicago’s west side was easily evident, but the President brought it back to the audience and how we can help.

We might respond, “But President Obama is not nearly the dynamic speaker Reverend King was?” In a sense, that’s true. King’s style was filled with a constant undulation and change in tempo. Obama has a lower key style, and comes across like a sort of educated everyman. He sounds like someone you know. King sounded bigger than life.

The President’s role, however, and the nature of what he was addressing, as well as the related goal, was different than King’s role. King spoke at a protest. Obama was announcing a task force and other initiatives.

Both invoked their own personalities as they delivered. Both used the words which would be heard by and influence their supporters. Both grabbed listeners’ hearts and inspired their audience.

When you prepare any speech, no matter how mundane the topic, think theater. That’s the art of public speaking.