The Luckiest Man on the Face of the Earth: Lou Gehrig 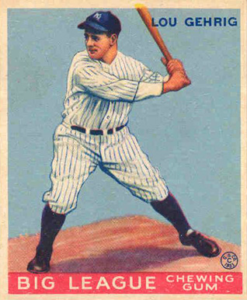 When Lou Gehrig, famous as a magnificent hitter for the New York Yankees, was diagnosed with amyotrophic lateral sclerosis (ALS), things looked bleak. One of the greatest baseball players ever was having to call it quits. He was in his mid-30s, not an unusual time to retire from baseball, but he was “The Iron Horse.” His resiliency was as impressive as his performance. Worse yet, it wasn’t merely the end of a legendary baseball career, but the end of his life.

When he delivered the following speech, the audience gave him a two minute standing ovation. They applauded his character and grace as much as what he did on the playing field.

For me, personally, this is like Martin Luther King, Jr.’s I Have a Dream speech in that it met the event of the day perfectly. Gehrig kept on point, reaching his audience so deeply that one writer said it was “one of the most touching scenes ever witnessed on a ball field”, that made even hard-boiled reporters “swallow hard. (John Drebinger, “61,808 Fans Roar Tribute to Gehrig”, The New York Times, July 5, 1939). Some 80 years later, I read this and still swallow hard.

Fans, for the past two weeks you have been reading about the bad break I got. Yet today I consider myself the luckiest man on the face of this earth. I have been in ballparks for seventeen years and have never received anything but kindness and encouragement from you fans.

Look at these grand men. Which of you wouldn’t consider it the highlight of his career just to associate with them for even one day? Sure, I’m lucky. Who wouldn’t consider it an honor to have known Jacob Ruppert? Also, the builder of baseball’s greatest empire, Ed Barrow? To have spent six years with that wonderful little fellow, Miller Huggins? Then to have spent the next nine years with that outstanding leader, that smart student of psychology, the best manager in baseball today, Joe McCarthy? Sure, I’m lucky.

So I close in saying that I might have been given a bad break, but I’ve got an awful lot to live for.