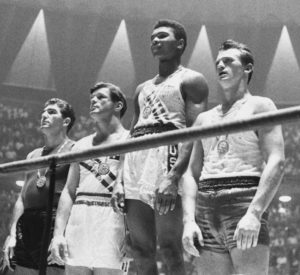 When Muhammad Ali died, I awoke strangely sad. I never met him. His views did not represent mine (our faith was very different). Some aspects of his life, namely how he treated his spouses, was not, in my opinion respectable. Why did I feel sad? Like other incredible, but broken athletes, like Pete Rose, there was something bigger than their humanity. Maybe it is their humanity than makes them more real? I don’t know, but Muhammad Ali’s gravitas in my life was sure. I never gave this but I felt I needed to write write it.

I first posted this on Facebook and it quickly went viral. Click here to scroll through the comments. Some people asked me if this was technically a eulogy. It is. Although he and I never met, it still qualifies. It is a “good word” as eulogy would translate from the Greek.

If as you read, the ghost of Howard Cosell seems to float through, it should. I could hear his voice in more than a few lines. This might be most poignantly heard in the first paragraph.

My Eulogy for Muhammad Ali

Ali. Ali. Ali… What can add to his legacy? No one has exceeded him in his sport, strength of character, or sheer presence of personality. Not Tyson. Not Jordan. Not Favre. Only Ali.

I was a kid in the late 1960s and 1970s — when he owned the world. He was everything he said he was and more. As a 10 year-old kid in the mid-70s, to me, he was a superhero who didn’t need a mask. No movie has captured what we all saw then. No actor could play him because he shone brighter than the best of Hollywood. While I never wanted to box, he was a hero to me and one of the only athletes to inspire me.

He was the last of the legendary athletes. Bigger than big. Ali was more than swagger, more than proud, more than cocky. He was confident in ways reminiscent of the Sultan of Swat. In a sense, he called every shot and followed through magnificently.

When he stood for something, he stood taller than the rest. He was willing to sacrifice his only career and reputation for what he believed. Today’s celebrities, like Bruce Springsteen and Sinead O’Connor, only pretend to make a stand as they have nothing to lose. Ali had everything to lose and spoke boldly in spite of that risk.

He entertained but never so much that it diminished his ability to compete. Playful, graceful and yet, completely serious about winning, Ali showed what excellence in and out of the ring looked like.

I always wanted to meet him. One of his daughters lived near me and he was often in town. I could’ve. I wouldn’t ask him about fights as I don’t know boxing. I wouldn’t bring up any controversies since they didn’t involve me. I wouldn’t ask why he fought once more than he should’ve because there’s no reason to bring up what he no doubt regretted. I would shake his hand and say, “Thank you, Mr. Ali.” I would try not to get teary seeing him struggle, but look directly into his eyes as the man he remained underneath his battered skin.

Thank you, Mr. Ali. I’m sorry, but I am teary-eyed now. I think I’m OK with that. You were… You are… The Greatest.

Let me help you with your eulogy.