When A Gunman Is In the Building, What Will You Tell the Media? 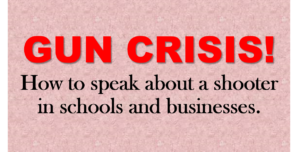 GUNS! Stop. I know it is an inflammatory topic. Let’s not go there. Is there a shooter in your business or school? Focus on that. You’ve just received news there’s a gunman in the cafeteria. Now what?

Are you the CEO, principal, or official spokesperson? What will you say? What about dead or injured people? Who? Are you legally allowed to say their names? Should you? How many shooters? Former employee or student? What triggered the rampage? Overwhelmed yet? I would be. That’s a lot to deal with and this is just the beginning.

First, you contact the police. They’ll offer immediate and useful advice far beyond the scope of this article. Read this FBI article getting into some of this. Read Active Shooter Resources too, also by the FBI.

You weren’t hired to do this.

You were hired to announce good news. Great cross country victories, chess team triumphs, National Merit Scholars. You were hired to lead the business or school into a better future. But here you are with a tragedy in motion and you’ve got to talk about it.

The fact is, you were hired to do this. You were hired to lead through good and bad times. You are also the person who gets stuck with announcing bankruptcy, hurricanes, internal scandals, abuses of power, and so on.

I wish all of your announcements were about record sales, expanding work forces, or how your students raised millions of dollars for a great cause (after getting all As and winning the state cross country championship).

If you were hired to lead or as a spokesperson, know that you can do this. You are smart, approach challenges with wisdom, and have other soft and hard skills to navigate this difficult situation. Trust your experience and craft.

Plan ahead. I’ll say it again: plan ahead. Plan ahead. Can I be more emphatic? There are several scenarios you can imagine long before you are forced into this challenge. Write them out. Keep a thorough communications strategy in place. Create a fill-in-the-blank speech. Create outlines for a few categories. It isn’t just guns, of course, but a myriad of other matters.

As you can imagine, there is so much I don’t have space to address. With that, please realize you don’t have to wing it. You aren’t alone with this question, and unfortunately, we have examples to help teach us what the best communications techniques are. So, get advice.

Consider talking with your peers elsewhere. You aren’t the only one sorting this out. Call someone you know who has your job at another company. Share ideas.

Think this through, then, run it by your legal team. There will be things you can and cannot say. There are also things you can say legally, but probably shouldn’t for the sake of their loved ones, or that will increase tension and fear. Know which is which.

Similarly, at the time of the event, work with law enforcement to ensure what you say doesn’t escalate the problem or hinder their work. Lives are on the line. Get this right. You are part of the solution.

As you speak, your speeches should be short and somewhat generic. This isn’t a time for eloquence or emotion. Be human, but avoid losing your composure and be compassionate. You should acknowledge you and your organization is doing everything possible to bring this to a peaceful close. You also want to assure your audience you understand their concerns and that you will update them as soon as you can. Ask for their support now, and also, as an investigation ensues.

Whatever your view is of guns in or out of school isn’t part of your planning. Be sure your bias doesn’t filter through. That will only isolate and polarize your audience. This isn’t about you, politics, or any particular position. Anything that distracts from your mission as a leader during a crisis needs to wait. You are trying to build understanding and support in the midst of a horrendous event. Work toward resolution, not controversy.

Your audience has views on this as well, but in the moment, what they care about is that their loved ones are safe as can be, or will be soon.

I love free speech. You, however, have a unique responsibility during the crisis itself. The crisis will end. Then, have at it. Please. Talk about it. Get beyond the histrionics and unrealistic solutions, but talk real world, and do more than talk. Figure out ways to reduce these shootings locally and, if you can, nationally. Don’t demonize the opposition. Meet with people from opposing positions who honestly want the same thing. Mostly, they do, but see the solution differently. Listen. Discover where you agree and build from there. Use your leadership and communication gifts to make this a better world.

May this never happen to you. It will happen to someone. In just the last two weeks, this affected high schools in my circle. In the high school I attended near Chicago, a student was arrested for posing with an AK-47 on social media. At the high school a mile up the street from my home near Atlanta, a student was arrested for bringing a handgun to school. In the high school across town, a group of students are accused of making false claims that another student was planning a violent act. In Dalton High School (Georgia), about two hours from me, just yesterday, a teacher shot a handgun (and subsequently arrested) in his classroom. Thankfully, none of these situations led to something worse.

We know what happened in Marjory Stoneman Douglas High School, Columbine High School, and Sandy Hook Elementary School. In Orlando, an ex-employee of a manufacturer killed five people. Wikipedia has a page devoted to listing killings that happened at post offices. The list goes on.

As you lead and as you speak, be ready.

I’d love your comments on LinkedIn. Please be civil.

Anthony Trendl is the principal speechwriter at AmericanSpeechwriter.com, an executive communications advisory firm. Delivering his work: Fortune 500 leaders, athletes and notables at places like Harvard University, Princeton University, UCLA, Beijing, South Africa, the Netherlands and beyond. His speeches have helped raise millions of dollars, and have increased audience engagement across the globe.