Address to Nation on the Challenger – Ronald Reagan 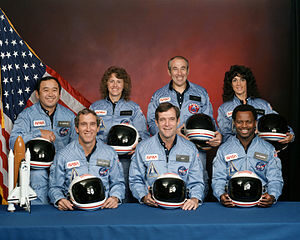 The United States was in shock when the space shuttle Challenger exploded, killing everyone on board. What began as a glorious adventure into space ended violently in a moment. Celebrations quickly turned to mourning. While President Reagan was noted for his well-deliberated, warm and often humorous speaking style, this required something different. He wouldn’t be speaking boldly against communism or its related oppression, or making some political statement. Instead, he used his office to draw together our nation and beyond as one people, all grieving the same tragedy.

Reagan faced an impossible deadline. He had been working on his State of the Union speech. He had to bring his A-game without time to craft a considered speech, and then, no time to practice. He knew who could help, and that was the 36 year-old speechwriter Peggy Noonan.

Noonan had a daunting task and no time to do it. No one wanted a long speech, but she had a lot that needed to be said. She wanted to remind us of the names of those who had died. She didn’t want their lives to be minimized in this extraordinary circumstances of their deaths. Meanwhile, as the nation watched the explosion and would be watching the President’s speech. Children would be watching, dreaming of trips to Mars, and people in their 80s, remembering it wasn’t so long ago that we first took flight.

She marvelously quoted John Magee’s poem High Flight (see below). Because she was so well-read, she had a great pool of ideas from which to draw.

This particular speech shows how a leader working with a speechwriter can bring amazing results. Their collaboration was hardly a one-off, thankfully, as she penned so many more of his speeches as well as served as a special assistant.

For me, personally, this is poignant because I remember watching the explosion and the subsequent speech. I was in college and in class when it exploded but saw the replay on the television in the commons. As someone born in 1966, the United States space program matured during my childhood. The Challenger flight appeared to be another step toward what Star Trek fans knew “To boldly go where no man has gone before.” When it exploded, anyone watching knew seven people died. Men were no longer the only ones going boldly, but women as well. Two women, five men died that day, and the space program changed thereafter.

Ladies and Gentlemen, I’d planned to speak to you tonight to report on the state of the Union, but the events of earlier today have led me to change those plans. Today is a day for mourning and remembering. Nancy and I are pained to the core by the tragedy of the shuttle Challenger. We know we share this pain with all of the people of our country. This is truly a national loss.

Nineteen years ago, almost to the day, we lost three astronauts in a terrible accident on the ground. But, we’ve never lost an astronaut in flight; we’ve never had a tragedy like this. And perhaps we’ve forgotten the courage it took for the crew of the shuttle; but they, the Challenger Seven, were aware of the dangers, but overcame them and did their jobs brilliantly. We mourn seven heroes: Michael Smith, Dick Scobee, Judith Resnik, Ronald McNair, Ellison Onizuka, Gregory Jarvis, and Christa McAuliffe. We mourn their loss as a nation together.

For the families of the seven, we cannot bear, as you do, the full impact of this tragedy. But we feel the loss, and we’re thinking about you so very much. Your loved ones were daring and brave, and they had that special grace, that special spirit that says, ‘Give me a challenge and I’ll meet it with joy.’ They had a hunger to explore the universe and discover its truths. They wished to serve, and they did. They served all of us.

We’ve grown used to wonders in this century. It’s hard to dazzle us. But for twenty-five years the United States space program has been doing just that. We’ve grown used to the idea of space, and perhaps we forget that we’ve only just begun. We’re still pioneers. They, the members of the Challenger crew, were pioneers.

And I want to say something to the schoolchildren of America who were watching the live coverage of the shuttle’s takeoff. I know it is hard to understand, but sometimes painful things like this happen. It’s all part of the process of exploration and discovery. It’s all part of taking a chance and expanding man’s horizons. The future doesn’t belong to the fainthearted; it belongs to the brave. The Challenger crew was pulling us into the future, and we’ll continue to follow them.

I’ve always had great faith in and respect for our space program, and what happened today does nothing to diminish it. We don’t hide our space program. We don’t keep secrets and cover things up. We do it all up front and in public. That’s the way freedom is, and we wouldn’t change it for a minute. We’ll continue our quest in space. There will be more shuttle flights and more shuttle crews and, yes, more volunteers, more civilians, more teachers in space. Nothing ends here; our hopes and our journeys continue. I want to add that I wish I could talk to every man and woman who works for NASA or who worked on this mission and tell them: “Your dedication and professionalism have moved and impressed us for decades. And we know of your anguish. We share it.”

There’s a coincidence today. On this day 390 years ago, the great explorer Sir Francis Drake died aboard ship off the coast of Panama. In his lifetime the great frontiers were the oceans, and a historian later said, ‘He lived by the sea, died on it, and was buried in it.’ Well, today we can say of the Challenger crew: Their dedication was, like Drake’s, complete.

The crew of the space shuttle Challenger honoured us by the manner in which they lived their lives. We will never forget them, nor the last time we saw them, this morning, as they prepared for the journey and waved goodbye and ‘slipped the surly bonds of earth’ to ‘touch the face of God.’

“Oh! I have slipped the surly bonds of Earth
And danced the skies on laughter-silvered wings;
Sunward I’ve climbed, and joined the tumbling mirth
of sun-split clouds, — and done a hundred things
You have not dreamed of — wheeled and soared and swung
High in the sunlit silence. Hov’ring there,
I’ve chased the shouting wind along, and flung
My eager craft through footless halls of air….
Up, up the long, delirious, burning blue
I’ve topped the wind-swept heights with easy grace.
Where never lark, or even eagle flew —
And, while with silent, lifting mind I’ve trod
The high untrespassed sanctity of space,
– Put out my hand, and touched the face of God.”